Skip to content
Properties of Liquefied Natural Gas & Its Hazards
Topic Progress:
← Back to Main Topic 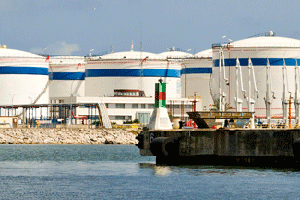 Liquefied natural gas is natural gas that has been cooled to -260 degrees farenheit (-130 degrees celsius). It is composed primarily of methane, an odorless, colorless, non-corrosive and non-toxic gas. When vaporized, it burns only in concentrations of 4 to 15 percent when mixed with air.

The Liquefaction of natural gas to LNG requires cooling the natural gas until it becomes a liquid. These processes include gas conditioning before liquefaction, processing and managing the impurities and liquid hydrocarbons, and storage and handling of the refrigerants that are used to cool the natural gas to a liquid state.

When LNG is spilled, it vaporizes rapidly, forming a cold gas cloud that is initially heavier than air. The cloud spreads and is carried downwind until it reaches neutral buoyancy, at which time it begins to rise. The vapor cloud is closely approximated by the visible white cloud that is actually water vapor condensed due to the cold LNG vapor. If the vapors come into contact with an ignition source, the vapor will burn back to the LNG source creating a pool fire.

LNG vapor burns at a relatively slow speed, as compared to Propane. Thermal radiation from the fire can create a thermal radiation hazard, as with any natural gas fire. LNG will not explode unless the vapor ignites in a confined space. The vapor is ignitable in the 4 to 15 percent range.

Toggle the pointer to see the topics in each category, then select the topic you want to learn more about.